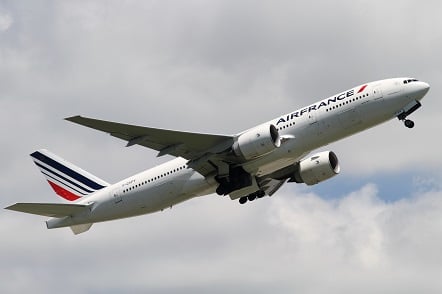 Fiv
e Air France employees will face trial in early December accused of aggravated violence – the quintet is suspected in connection with a shocking attack which saw two high-level execs flee over a fence.

VP of HR Xavier Broseta and deputy of long-haul flights Pierre Plissonnier both had the shirts ripped from their backs as they were evacuated through the increasingly irate crowds – two security guards were also reported to have been injured.

The incident occurred when the company announced plans to scrap 2,900 jobs by 2017 – the cuts will affect about five per cent of the entire workforce and include 1,700 ground staff, 900 cabin crew and 300 pilots.

A spokesperson for the international carrier confirmed 20 employees are now the subject of disciplinary hearings but five have been suspended ahead of a trial in northern Paris on December 2.

Police used video footage to identify and detain the five employees – if found guilty, the men could be ordered to pay up to ‎€45,000 in fines and spend three years behind bars.

News of the potential incarceration has been met with varied reaction – radical-left leader Jean-Luc Mélanchon not only defended the workers but encouraged other Air France staff to continue their fight.

He told BFM Radio that the men had been unjustly arrested for “trying to save their jobs” and warned executives “this time it was only your shirts.