Canadian companies are benefitting from HR development programs that are turning women into leaders, with new findings showing Canada is ahead of the rest of the world in promoting female leaders and that local company bottom lines are showing the benefits. 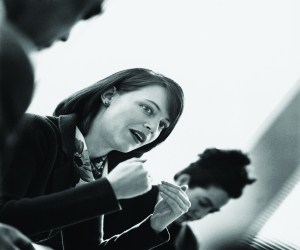 Can
adian companies are benefitting from HR development programs that are turning women into leaders, with new findings showing Canada is ahead of the rest of the world in promoting female leaders and that local company bottom lines are showing the benefits.

The latest Global Leadership Forecast from DDI and The Conference Board reported that Canada was number one in the world when ranked by the number of its female corporate leaders, with 50% of all Canadian companies surveyed having female leadership representation.

This gender balance at the highest level was in contrast to the rest of the world, where the key finding was that women were underrepresented, though there was no significant difference between men and women identified when it came to handling management and business challenges.

The survey suggested that Canada’s corporate community is reaping the benefits of a gender leadership balance, with gender diversity paying off for organizations surveyed where at least 30% to 40%  of leadership roles are held by women.

The same trend emerged in the percentage of leaders who were ‘high-potential’ women. “Among organizations in the top 20 per cent for financial performance, a statistically significantly higher per cent of leaders were high potential women (28 per cent).”

The report said one of the reasons for underrepresentation in other countries could be a difference in confidence among women leaders.

“Men considered themselves more effective as leaders. This self-confidence is reflected in how highly they rated their leadership skills and ability to tackle management and business challenges,” the report said.

“Women, on the other hand, were less likely to rate themselves as highly effective leaders compared to their peers, to have completed international assignments, to lead across geographies or countries, and most significantly, to lead geographically dispersed teams.”

The report urges HR executives to bolster current development programs or implement new practices that allow leaders – especially women – to build knowledge and skills, as development was likely to build opportunities and confidence.

Other HR strategies include ensuring formal practices are in place for selecting and transitioning leaders for international and stretch assignments to encourage diversity in global leadership roles, as well as building strongly supported mentoring programs.

The report surveyed 13,000 leaders in 2,000 companies across 48 countries, with the US and the Philippines coming in behind Canada on female leadership representation, with a tie on 41 per cent. Thailand was third, while Japan manages to boost just 8 per cent of women to the highest level.