Beastly bosses a living nightmare for many 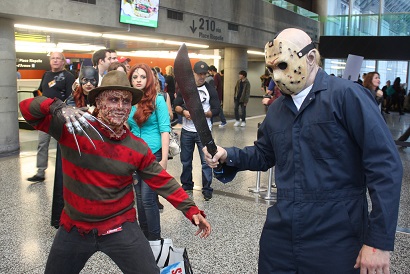 Wit
h Halloween just around the corner, many Canadians will be donning masks and making themselves look like monsters – but how many will have to face a true nightmare when they return to work?

A recent survey commissioned by jobsite Monster Canada found that 42 per cent of Canadians have left a job at one point purely because of their boss.

“People seek new roles for a variety of reasons, but quite often people don’t leave their jobs, they leave their bosses,” says Monster spokeswoman Sheryl Boswell. “These poll findings indicate that this isn’t an isolated phenomenon – a significant amount of Canadians have pursued a new position as a direct result of a bad boss.”

The survey also showed that there isn’t just one monster boss terrorizing the workforce from his or her corner office – there’s actually a whole host of tyrannical personalities employing a multitude of scare-tactics.

Brain-dead zombie – 27 per cent said they’d put up with an incompetent leader who is clueless, ineffective and unable to make strategic decisions.

Jekyll and Hyde – 27 per cent of Canadians said they’d known bosses to say one thing and mean another, getting angry when employees misunderstand.

Phantom of the Opera – 23 per cent revealed they’d had a boss who hogged the limelight, taking credit for anything they could.

Cruella de Vil – 22 per cent of respondents said they’d been subordinate to an abusive tyrant like de Vil who constantly yells and is never satisfied.

Werewolf – 21 per cent said their boss could never accept that anything was their fault.

The Invisible Man – 14 per cent said they’d had to deal with a missing-in-action executive who rarely answers emails or even shows up at the office.

Dracula – 12 per cent said they’d had a boss who expected them to be available in all hours and even on their vacation.

Beetlejuice – Nine per cent said they’d had to endure boss’ unsavory and offensive habits like crude jokes and chewing with their mouth open.

Freddy Krueger – Four per cent said they’d suffered at the hands of an inappropriate boss who couldn’t comprehend the “no-touching” rule.

The biggest ogre in the office

Some nightmare leaders are more common than others and some strike a far deeper fear in the hearts of the employees they rule.
According to the survey, Canadians are most likely to find Cruella de Vil-type leaders terrifying (54 per cent), followed by Jekyll and Hyde managers (36 per cent) and Werewolf leaders (35 per cent.)

Can one manager really replace an entire HR team?
Should your company follow the UK’s lead?
Are people really your biggest cyber-security risk?