The economic climate is creating perfect conditions for workplace bullying to move into more ‘ruthless’ territory, according to an expert 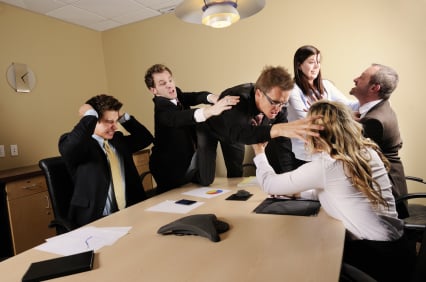 The economic climate is creating perfect conditions for workplace bullying to move into more ‘ruthless’ territory, according to an expert.   Alberta-based workplace bullying expert Linda Crocket has said bullying is on the rise across the country, at the same time as the job market worsens.   In an interview on Saskatoon Morning, Crocket said employees are currently worried about cutbacks and are beset by fear over losing their jobs.   “It creates an environment of paranoia and competition, and people are becoming ruthless to get what they want and they’re getting away with it.”   Crocket, who is the executive director of Alberta Bullying Research, Resources and Recover, said modern workplaces are breeding grounds for bullying.   She said that staff are working in increasingly high pressure environments, with economic pressures meaning they were forced to do more with less.   This could actually be costing companies in ways they do not control. She named lost productivity, legal settlements, and medical and insurance costs.   The result could also be a perfect storm for HR, which are likely to be the first port of call for employees who wish to complain of being bullied.   Crocket suggested some of the common behaviors to watch out for.   "They're using tactics to abuse other people in very subtle ways. Excluding people, isolating people, ostracizing them, basically," she said.   A Conference Board of Canada report released earlier this year said a definition of bullying needs to be established and understood within organizations.   According to The Globe and Mail, the report’s authors suggest it is usually degrading, intentional, cumulative, associated with a power imbalance and exacerbated by slow and ineffective management actions or processes.   The report agreed competitive pressures and workplace stress were major contributors to bullying when employees were being pushed hard.