What's the strangest interview answer you've given or received? These employees prove that a bad or weird answer isn't always a negative. 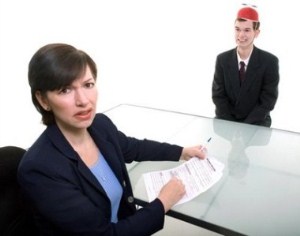 Som
etimes even saying the worst possible thing doesn’t end with disaster, as a recent Quora thread shows. When the question “What is the craziest thing you have ever said (or done) at an interview and still got the job?” HRM America knew there would be some gems from HR departments – and we weren’t disappointed.

The pocket cow
Richard Waddington was ready to move on after spending a decade with the same company but was understandably nervous for his first interview in more than 10 years. On his way out the door his four-year-old daughter handed him a small plastic cow for “good luck”, which he put in his pocket.
The interview went well, until the VP of HR told him she was concerned he was “a pretty straight-laced guy… How do I know you'll fit in?"

Without thinking, Waddington blurted out, "I have a cow in my pocket!"

“There was a moment of very awkward silence, and I was convinced I'd just blown it, but I found the cow, and set it on the table,” he said. “Another second or two went by before she burst out laughing.

Insulted the Ex
Olivier Peyre had the following potentially awkward conversation with his interviewer:
CEO & founder: "So, since you worked at X, you must know Ms Y"
Peyre: "Oh, I do know her. Quite a nut case if you ask me".
(4 managing partners around the table, jaw dropped in awe)
CEO: "She is the mother of my child."
Me: "..."
CEO: "Indeed, she is insane. We split up a few months ago."
And yes, I got the job.

Stalkers sometimes prosper
An anonymous contributor described their dedication to finding a job in finance in New York City, which could have ended in a restraining order instead of a job offer.
“I managed to get the contact information for a managing partner at one of the most selective banks in the world,” they wrote.
“I made several strikes from the beginning. I sent him an email letting him know when I was available (any Friday), instead of asking him when it was convenient for him. I did not tell him how I got his contact information.”
When the partner did not reply the anonymous writer kept emailing him until his assistant arranged a meeting – which was cancelled at the last minute. After four more cancellations, they decided to just show up anyway.
“When I walked into Mr. managing partner's office, he looked up and asked, ‘Are you that kid who won't stop emailing my assistant’, and laughed,” they wrote. “I told him I wanted to work on his trading floor, and that I'd be the best analyst he had if he gave me a shot. At the end he said ‘I have no idea who you are or how you got in my office, but you've got conviction and I like that. I'm going to help you.’ “

Turned down the job offer
During the interview process Gil Yehuda asked each interviewer independently what the number one job specification was, and all told him it was the top listed trait. However, the chief technology officer said it was a different trait. Confused by the varying answers, he tried to clarify and discovered a disconnect and confusion around the job description. When the company made a job offer he had to think twice.
“The truth is, I really wanted (needed) this job. But I said: I'm sorry, I don't think I can take the job if the company doesn't know what the job is,” Yehuda wrote. “You need to figure out what you want before you make an offer. I don't think anyone could succeed in a job where the very role is in dispute.”
Instead of looking for someone else the company told Yehuda it was a new position and they wanted him to come in to determine what was required. They asked what it would take for him to take on the task.
"If you make me an offer I can't refuse, then I won't be able to refuse it," he said. Just 15 minutes later he had accepted the position – “No regrets either.”