The Prime Minister announced on Sunday that he would reduce funding for parental leave in favour of government funded childcare schemes. 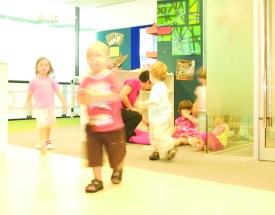 Ton
y Abbott has said that the government will cut costs on his paid parental leave scheme in order to contribute more funding to childcare.

Abbott said that the scheme will be restructured so that there is more money available to invest in childcare.

The parental leave scheme has faced much criticism, with even members of Abbott’s own party deeming the policy – which has a price tag of $5.5 billion – as too extravagant.

Parents and childcare experts have also criticised the policy, calling for funds to instead be moved into childhood education and care.

On Sunday, Abbott said he would be spending the summer drawing up the exact details of the renewed policy, adding that the new scheme would be “better targeted”.

He hinted that the government could look into funding childcare such as nannies, saying that he was “very keen” to work with home care.

“Once you have a child, if you want to stay in the workforce, you need childcare as well,” he said.

The new policy is expected to come into action around July 2015.

These issues will be considered as the government examines the final Productivity Commission report into childcare.

The policy currently in place would pay new mothers their full salary plus superannuation for six months, capped at an annual income of $100,000 – this has already been reduced from the initial allowance of a salary of up to $150,000 per year.

This comes after Abbott continuously claiming that he would not change his “signature” paid parental leave policy.

When asked if changing the policy was Abbott breaking a promise, he said that “sensible governments” have to “look at what’s happening in the community and respond”.

HC spoke with Ros Cardinal, managing director at Shaping Change, about the impact that the changes could have on the Australian workforce.

“If parental leave is scrapped in favour of childcare then workplaces may see women returning to work earlier than they might have planned,” she said. “Workplaces may also see mothers choosing to work full time rather than part time, if they can access affordable care.”

She also speculated on the effect it could have on working mothers.

“Speaking as a mother my personal view is that childcare is more valuable as it extends over a number of years, not just the immediate six months after the birth,” Cardinal told HC. “For women to remain in the workplace after children, we need to have flexible and affordable options right through until the children reach high school.”